Crossing two or more dog breeds results in the development of designer dog breeds. Bernedoodles are the hybrid offspring of the Poodle and the Bernese Mountain Dog. 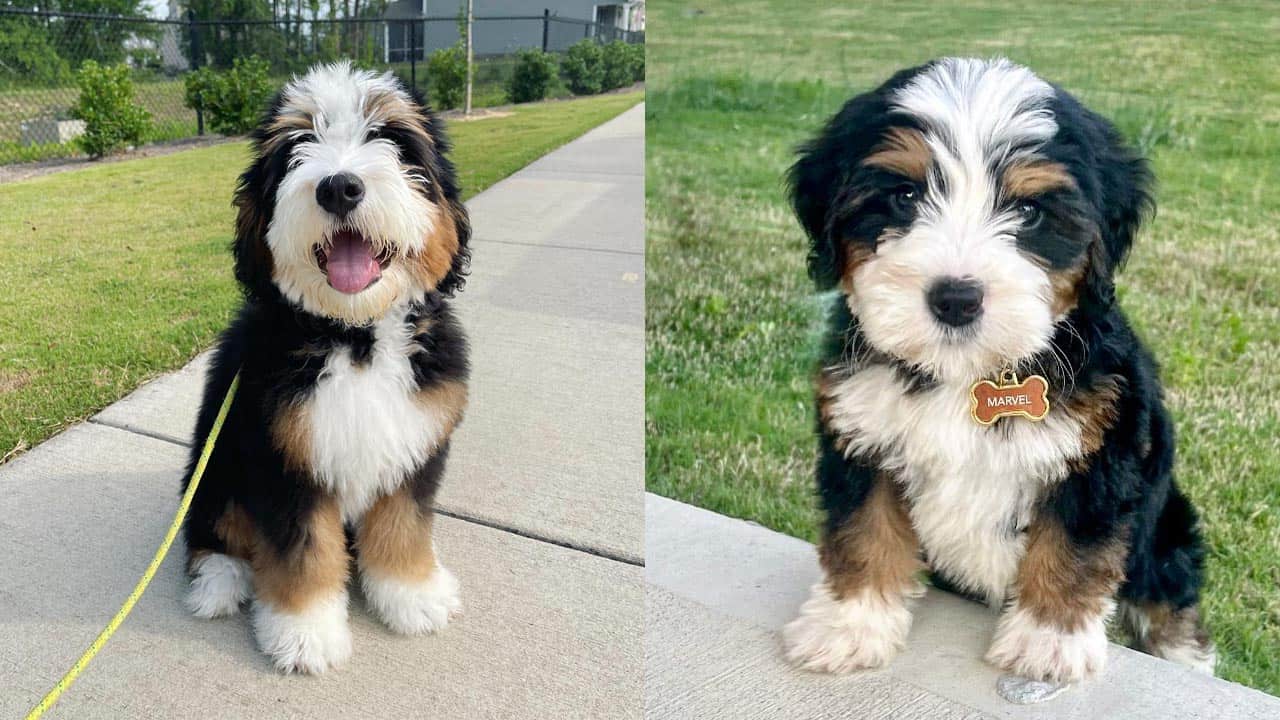 There are several reasons why Bernedoodles are a popular breed. They are beloved by many due to their adaptability, lovely curly coats, absurd habits, and clever temperament.

Although the Bernedoodle is regarded as a fantastic substitute for the Labradoodle or Goldendoodle, they are not without problems.

We’ll examine the most typical behavioral issues that this breed may have in this essay, along with solutions.

1. They Can Be Extremely Stubborn.

The headstrong nature of the Bernedoodle is a well-known behavior among this breed. The Bernese Mountain Dog is renowned for its tendency toward stubbornness.

Some of these obstinate traits may have been passed down to your Bernedoodle, but they will improve as your dog ages.

The Bernese were bred to labor alone to guard the land and herd livestock. The Poodle is quite smart. When you mix the two, you get a dog that can occasionally be stubborn.

They can also be raucous. Owners should never put off starting socializing and training because of this. Fortunately, with the right training, most of their intransigence disappears.

Owners of Bernedoodles have remarked that even if their dogs were aware of commands, they would often choose not to carry them out, particularly if they dreaded doing something.

But that does not imply that they cannot be trained. Although Bernedoodles adore their families and strive to please them, you must immediately set aside time to form a strong connection with your new puppy.

With time and persistence, you will be rewarded with a lovely companion. Still, everything will take longer, including toilet training your puppy, if you don’t have the time to devote to training your pup.

Smart dogs also require ongoing mental engagement to prevent boredom. For example, a clever, bored dog who starts gnawing on things around the house can turn destructive. So it’s crucial to give a Berne doodle mentally challenging games and toys to keep it occupied.

The Bernadoodle is prone to separation anxiety, just like other doodle dogs. When you give it some thought, it’s not shocking.

Bernedoodles struggle in a home where there is no constant attention given to them. They are family-oriented dogs, after all.

Bernedoodles require a home where someone is always present so they may receive care. For people who are employed full-time, Bernedoodles are not a good choice.

It makes sense why Bernese always wanted to be nearby when they were also used as herding dogs.

These canines function best when they are with a person most of the day. Bernedoodle owners frequently remark on how much their dogs follow them around.

This is especially important for socialization, exercise, training, and overall excellent temperament while they are puppies.

For example, you might want to think about another breed if you don’t have someone home most of the time.

Start teaching them to spend time alone when they are still puppies for the simplest way to avoid separation anxiety. Start with a brief time, and extend it as they get older. They won’t get upset when you leave once they realize you’ll always return.

Once more, if you don’t have the time to train them gradually, they could turn out to be destructive if left unattended.

These canines are not the kind that should be left alone all day. You are not the perfect candidate for this breed if your way of life requires you to be active all day.

Early socialization is essential since they can inherit the Bernese Mountain Dog’s cautious personality. It can be difficult for people who spend a lot of time away from home because this breed frequently needs care from their owners.

However, no matter how busy you are, you shouldn’t leave a Bernedoodle alone for long periods. Instead, you should sign them up for dog boarding if necessary.

3. They Take Time To Mature.

The common Bernedoodle is known for maturing gradually. In actuality, larger dogs typically take longer to mature than smaller canines, and it can take a Bernedoodle up to two years to grow to full size and weight.

However, not only their physical maturation is slow, but also their cerebral development. Owners of Berniedoodles report that their puppies settle down and put an end to their mischievous behavior between the ages of 2 and 3.

This includes behaviors like counter-surfing and gnawing on prohibited goods. Additionally, housebreaking them might take more time.

A Bernedoodle will settle down as it ages, just like any other dog, and then much more as it ages. However, by 16 to 22 months, your Bernedoodle will have moved through the challenging “puppy brain” stage and into mental adulthood.

The Bernedoodle is a fantastic option if you want a dog who behaves like a puppy for a long time. Miniature Bernedoodles will develop a bit more quickly.

4. They Are Prone To Mischief.

Although not all Bernedoodles behave this way, several owners have mentioned how they enjoy stealing items like socks and moving them from one location to another.

It can be considered cute in some situations, but it can also be a serious issue in others—especially because they enjoy eating socks and other clothing.

Although the larger doodle breeds have admittedly consumed objects made of material, the Bernadoodle seems to do it more frequently than any other doodle.

They are known to surf the counter as well as steal things. Given their size, a normal Bernedoodle may easily reach the kitchen worktops or dining room table. They are not an ideal partner for someone who likes to leave things lying around due to this inclination.

Bernedoodles enjoy speaking up. These dogs bark. A lot. Barking, whining, and grumping are examples of this. However, not everyone wants a canine that responds to commands or barks whenever someone passes by the house.

You must keep in mind that a Bernese’s inborn instinct is to bark at strangers. Don’t worry; there are a few things you can do to minimize your Bernedoodle from barking a lot.

If you leave your Bernedoodle alone for too long, it might start barking a lot. They are renowned for being highly sensitive and anxious. They become uneasy when left alone, which causes them to bark.

They could feel safer if you play soothing music for them or keep the lights on. Placing the dog beside the window so it can gaze out is also a smart option.

Your Bernedoodle may become bored and start barking if it discovers that it is idle. Give your Bernedoodle some amusing toys, or simply play with them. When they see their owner or anything else they enjoy, Bernedoodles are thrilled. Simply ignore the dog until it stops barking.

Bernedoodles take their domain seriously and do not like having outsiders in it. They can lunge and bark when they see strangers or other new faces.

Training them for social interaction and rewarding them when they don’t bark are the best things you can do. They are also only worried about risks of any kind. Here, gradual socialization is crucial.

As was previously mentioned, Bernedoodles take their territory seriously and may become aggressive when someone enters it, especially when they are eating or drinking.

Due to their great sensitivity, Bernedoodles have problems handling loud, shocking stimuli. It’s better to reserve a space for the dog alone, prohibiting anyone from entering at any time. When they eat or drink, let them alone.

They frequently exhibit suspicion when interacting with strangers. To address this, however, early socializing skills development is very important.

Bernedoodles do not exhibit aggressive traits, especially if they are raised in a favorable breeding environment.

But because they need constant socialization from their humans, they are more likely to experience separation anxiety, which can result in other negative behaviors.

For instance, chewing on objects around the house when their owners are gone is a typical symptom of separation anxiety.

Bernedoodles get along well with other dogs in addition to people, but for this to happen, they often need to start socializing at a young age.

If a Bernedoodle owner or breeder puts off socializing and training the dog for too long, the result could be a dog with no tolerance for other animals.