A Shihpoo is a combination of the Shihtzu and the toy poodle. Dogs with the Shihpoo pedigree tend to inherit the endearing qualities of their parents, including small size, intelligence, stubbornness, and friendliness. 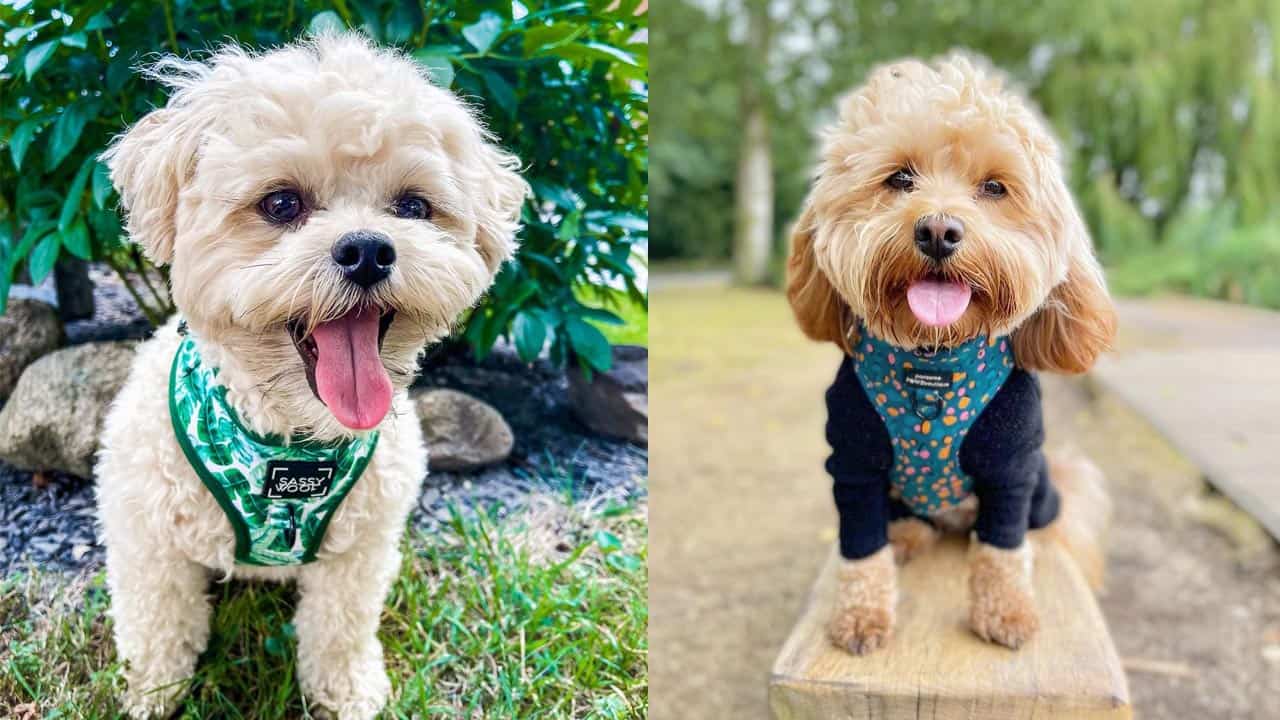 Many different coat colors and patterns are available for the Shih Tzu Poodle mix. In some cases, dog owners hypersensitive to dog dander may tolerate the Shih Poo because its coat can be relatively low-allergen, depending on the degree of curl.

You can predict a mixed breed’s appearance by studying its parents’ appearance.

The Shih-Poo is a relatively new addition to the world of hybrid dogs, which various poodle mixes have traditionally dominated. To understand the origin of the Shihpoo, we should first look at the origins of both its parent breeds.

A standard theory about the Shih Tzu’s genesis holds that the original dogs were bred to look like the handsome lions (complete with flowing manes) depicted in ancient Chinese artwork.

The ancestry of the “Lion Dog,” as the breed is colloquially known, is typically credited to China. Ancient Shih Tzu remains have been discovered. The Shih Tzu is among the oldest dog breeds of recent research.

Shih Tzus were first brought to Europe in 1930 and arrived in the United States later that same decade. It was officially recognized as a breed in 1969 by the American Kennel Club, which classified it as a member of the Toy Group. The organization ranks it as the twenty-first most common animal.

Both the Poodle and the Shih Tzu have contested histories. Although some authorities place the dog’s beginnings in Germany, others put it in France.

Similar to the Shih Tzu’s prevalence in art, the Poodle appears in works dating back to at least the 15th century. Poodles are the seventh most popular dog breed, according to the American Kennel Club (AKC), which has recognized them as a breed since 1887.

The Shih Poo puppy mixed breed can trace its ancestry back to the United States, where it was first introduced as a miniature dog breed with the hope of being hypoallergenic.

For that reason, Shih Poo puppies are highly desirable and are held in the same regard as dogs like the Toy Poodle, Miniature Poodle, and other small dogs that come in hypoallergenic varieties and are part of the American Canine Hybrid Club.

However, despite their widespread acceptance as teddy bear mixed breed dogs, Shih Poos are not yet recognized by most kennel organizations, such as the American Kennel Club.

This hybrid is adaptable and can live comfortably in various settings. Shih poos should live inside with their owners, where they can get plenty of cuddle time and adoration.

At maturity, Shih poos can reach a height of 8 inches and a weight of 18 pounds, and their average lifespan is between 13 and 17 years.

Shih poos aren’t the best choice for families with young children because they can easily be injured by kids who don’t know how to play with dogs. The dogs suffer from separation anxiety and must be around humans.

This breed is held in very high regard and is a member of the International Designer Canine Registry.

The Pattern Of A Shih Poo Coat

The coat of a Shih Poo may be short and curly, long and silky, or a combination of the two. You can find coats of poodles in various solid colors, such as black, apricot, white, and gray.

Unlike the Poodle, whose fur is uniform in color, You can find Shihpoo fur in a wide range of shades and hues.

Shihpoo Coat Colors and patterns can vary greatly, even among siblings in a litter of Shih Poos.

The coat of a Shihpoo poodle mix can take on either the short, curly traits of the Poodle or the long, silky, straight coat of the Shih Tzu. A crossbreed’s coat may look somewhere between its parents’ curly and straight coats.

This puppy can have a variety of coat colors, including brown, gray, red, black, white, brindle, and apricot. The coat style of a puppy can change dramatically as it matures.

Let’s examine the coat patterns of Shih Tzu and Poodle, the Shihpoo’s parents, to learn more about this unique coat type.

A Shih Tzu with this coat type has a uniform color over most of his body, but his head and neck consist of various colors. This gives the appearance of a cute little shawl.

A white line goes between this dog’s eyes, and there’s a chance it could reach its lower back or neck. However, it always seemed to cause a split in the middle of the pupils.

It is similar to the blaze, except the white area on the dog’s head gets wider as it approaches the crown. Sometimes, it may even take over the cervical and thoracic spines.

It is characterized by a single, uniform color broken up by flashes of white at the chest and, occasionally, the feet. A tuxedo-like effect is achieved, giving the dog an elegant look.

The Poodle’s dense coat is what gives them their reputation for virtually nonexistent shedding. While most Poodles have curly, silky hair, this characteristic can vary with age and grooming.

Poodle puppies have a different type of hair when they are very young compared to what an adult Poodle would have. Poodle puppies tend to have softer, less curly coats than other breeds.

About nine months to a year into your Poodle’s life, you’ll notice that their coat begins to develop more waves and curl.

Coats of older poodles tend to be thick and curly. These coats can take on a variety of textures, from loose, wavy waves to tight, small curls. To prevent matting and tangles, a poodle’s curly coat needs regular grooming.

A corded coat happens when a poodle’s hair is allowed to grow naturally matted. These curls, which typically mat into small ropes, can be grown anywhere on the body, not just on the head and ears.

Poodles with sensitive skin should avoid having corded coats because they are notoriously difficult to maintain.

Since the Shih Tzu is a parent breed, these dogs can also have white markings, patches, or a black face mask. Shihpoo colors typically are a mix of both parents.

Because coat color and pattern expression vary from puppy to puppy, each litter will have its one-of-a-kind look. Puppies from the same litter can have strikingly different appearances due to the variety of coat patterns available.

There are some solid-coated Shih-Poos, but white markings are more common. Unmarked, solid-colored dogs are significantly more unusual. They are more likely to have a pattern or be multicolored.

Black Shih Tzu poodle mixes are highly unusual but undeniably adorable. The dog’s coat is as black as the night sky and looks like nothing else.

The Shihpoo’s coat color can range from a light coffee brown to a deep chocolate brown, similar to that of a chocolate Labrador.

The dog’s rich brown coat is complemented by a brown nose and light hazel eyes, which is a nice touch. Their dark eyes and black noses set them apart from their littermates strikingly.

Solid black is a striking color choice that is rare and most frequently seen in monochrome. Alternatively, most dogs are solid black with only a spot or two of another color here and there.

Unlike their more common black counterparts, white Shih Tzu is extremely rare. The most common secondary color in multicolored dogs is white, though different colors occasionally appear. The black nose, however, will stand out like a sooty lump of charcoal on a white snowman.

A solid blue Shih Tzu may appear gray at first glance, but its true hue shines through when held up to the right light.

Puppies of the Shih Tzu breed are more likely to be red than adult dogs because the red coat color typically fades as the dog matures. In most lighting conditions, this hue appears orange.

The silver hue looks very much like white but has a metallic sparkle.

While golden tones are familiar in canines of many coat colors, a Shih Tzu with a single, uniform shade of gold is highly unusual. Usually, it will start bright and shiny. However, as the dog ages, the color usually changes to a light yellow.

Even though they are usually browner white spots frequently appear, especially on the chest.

A Shih Tzu can be described as brindle if lighter or darker streaks have patterned its otherwise solid fur. Since combining those two colors is possible, it is not unusual to find Shih Tzus of all brindle varieties.

As the name implies, a double-colored Shih Tzu has two distinct colors, but the white coat is the standard coat color for this variety.

Even though tricolored Shih Tzu is unusual, they are often overlooked because the third color is so faint.

What is the unique color of a Shihpoo?

Looking at a Shihpoo’s parents’ rare colors can give light on the colors that are rare for a Shihpoo breed. The all-black Shih Tzu is the rarest of all the Shih Tzu colors.

Poodles with an apricot coat color are the rarest of all poodle coat colors. Compared to a standard red poodle, an apricot poodle has a much lighter coat, but the hair still has a reddish undertone.

Based on the dogs’ family tree, a breeder should be able to tell the difference between a red-colored poodle and an apricot-colored poodle.

Which Coat Color is Common in a Shihpoo?

Shih Tzus come in various colors, though white is the most common. A Tuxedo Shih Tzu is a single-colored dog with a white chest and is among the most common of this breed.

Black Poodles are the most common and most popular. The solid white Poodle, however, is a close second and is loved by their human families worldwide.

Historically, black and white poodles have been the most popular, but in recent years, red poodles have exploded in popularity worldwide.

The best way to maintain the health of your Shih Tzu poodle mix’s coat is to brush it regularly. Keep the dog’s coat in good condition by taking him to the groomer monthly for a trim.

Because of their poodle ancestry, Shih Tzus shed very little and may be suitable for people who suffer from fur-related allergies.

A monthly or bimonthly bath is fine, but you should be careful not to get water in the dog’s ears, as this can cause infections.

Regular tooth brushing, preferably three or four times a week, will keep your Shih poo’s mouth healthy and free of bacteria that can lead to dental issues.

You won’t find a better dog than the Shih Tzu poodle mix if you’re looking for a playful and affectionate companion.

When buying a dog, it’s essential to determine if the breed is a good fit for your family and your lifestyle.

A Shih Tzu poodle mix may inherit the Poodle’s short, curly coat, the long, straight coat of the Shih Tzu, or some combination of the two.

The coat may be marked with a variety of colors and patterns. As a puppy matures into an adult, its coat can undergo dramatic transformations.

You can gain insight into a hybrid’s appearance by analyzing its parents’ traits.