You just can’t resist the bundle of cute that is the Pomapoo. They are pedigree dogs adored for their rich fluffy coat and attractive personality. 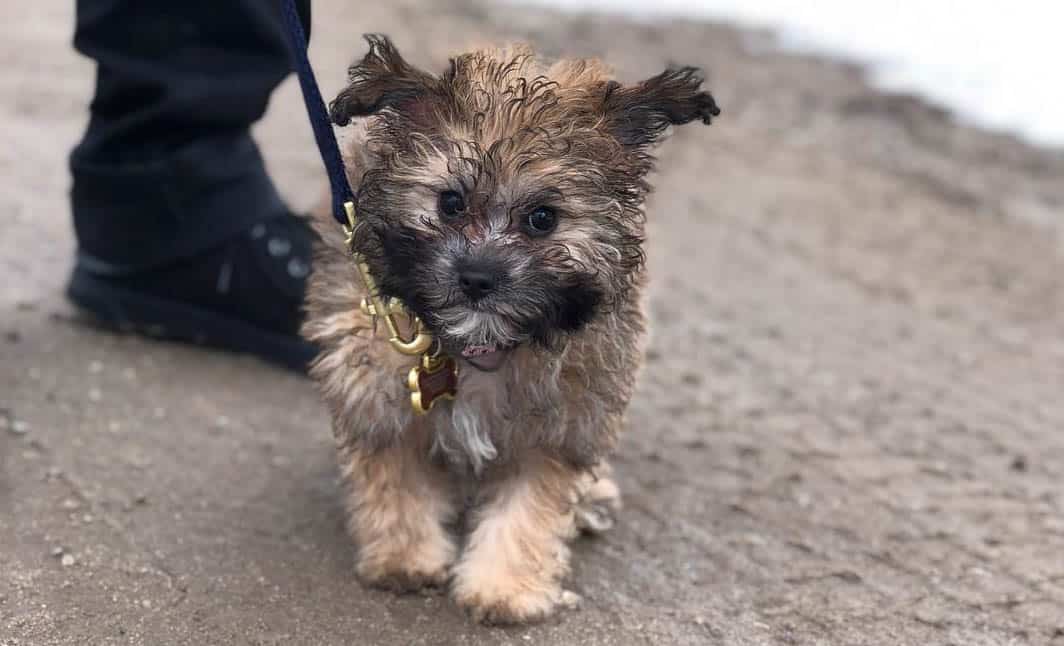 Pomadoodle will fit into your lifestyle and will forever remain a lovable companion.

There are several factors to consider when buying a pedigree dog. Since Pomapoo or Pomadoodle are cross-breed dogs, they carry the genetic makeup of both their parents.

This will influence everything from how they look to how they relate with their master and surrounding.

This do is a mysterious fellow as little is known of his true origins.

Breeding experts suggest that he must be from Europe since his two parents are of European descent.

Pomeranians were also a favorite of the aristocrat, with the likes of Mozart, Marie Antoinette and Queen Victoria owning one.

Queen Victoria bred the Pomeranian to their present smaller sizes, sparking a new love for them all over England.

Royalty is in the DNA of this and you will evidently see this in the elegance he displays. Another cute pomeranian mix is Pomsky.

2) Pomapoo’s height ranges between 8 to 10 inches

Pomapoo has a soft fluffy coat that complements their adorable persona.

Their height ranges between 8 to 10 inches, from the shoulder, and will weigh from 5 to 15 pounds.

Some Pomapoos will grow taller than this and even weigh heavier depending on their genetic makeup.

The texture of his coat may vary between straight, wavy and curly.

The same is said of his color which may be a shade of red, fawn, brown, black, sable, or white.

He has a tiny wedged face and a long narrow muzzle that ends with a dark button nose.
Read Article – Cutest Poodle Mixes

If you feed and treat him well, He will live up to 10 or 15 years. Some Pomadoodles have so much love to give that they extend this to 16years.

They inherit this longevity from their parents, so ask the breeder how long the parent Pomapoos have lived for can give you a rough idea of the puppy’s lifespan.

4) He will befriend everyone he meets

Pomapoo’s personality can be described as affectionate and infectious. He is a sweet pedigree dog that will befriend everyone he meets.

He is great with adults and kids ages 3 years and above.

Also, know that the Pomadoodle is a real sucker for attention. He gets really jealous when you become so preoccupied with your newborn baby and forget all about it.

The hidden envy will show up as nibs or scratch marks on your toddler, so do not leave him alone with underage kids.

Other than that, Pomapoo is by nature a very friendly, loyal, and extroverted dog.

But go easy on the pampering as he can grow really needy when left alone.

Train him to be comfortable in his own company early when he is a pup.

5) Pomapoo draws his intelligence from the Poodle

They are very agile and have an obedience that rivals most pedigree dogs with a near similar temperament.

Poomadoodle is quick to learn all the new tricks you have in store for him and may even surprise you with some of his own.

6) Pomapoo is a very easy dog to train

Given his loyal and eager-to-please demeanor, Pomadoodle is a very easy dog to train.

How quick he is to learn new tricks depends on the dominant breed in his genetic code.

If his personality is more of a poodle, then he will be very smart and easy to train.

If he is more of a Pomeranian, he still will be eager to learn albeit at a slower pace.

Poma poo will seldom give you troubles during training. However, it is recommended that you start training him while he is a pup.

Once he gets accustomed to the routine, you can train him on and off when he is a full adult.

It takes less effort to exercise a Pomapoo Puppy.

Any moderate activity you can introduce him too should be enough to maintain his physique and offer adequate mental stimulation.

Pomadoodles are happy to trail you behind as you go about your day.

If you stop to work on something, he will be a short distance from you happily watching or catching quick snoozes.

You don’t have to take him out to the park every day. Once or twice a week is enough to keep him healthy and fit.

If you live in an apartment with no park around, introduce some toys to him like fetch balls.

He will be happy to run after the ball and even wrestle with it for fun.

For food, anything on your family dinner menu is good for him.

Ensure you add some dry kibble on his diet to maintain his strong teeth.

Pomapoo may be predisposed to some of the health issues that face Poodles and Pomeranians.

However, thanks to the cross-breeding factor, his genetic makeup may be strong enough to withstand some of the common ailments affecting his parents. Your only concern is that he does not develop gum disease.

9) His fur coat can get quite tangly if not brushed

Your Pomadoodle will need moderate grooming to keep him looking elegant as usual.

For Pomadoodles with silky coats, brushing one every four to five weeks is enough.

If he inherits the more curly coat, then you have to brush him once every day.

Ensure you introduce these grooming practices when he is young so he becomes accustomed when he is an adult.

Fortunately, Pomadoodles are hypoallergenic like their parents the Poodle.

However, he may pick up a little dander and dirt if he is not cleaned.

While giving him baths, clean his ears as well to prevent infections.

Add nail clipping to the occasional pampering too, he really values his overall elegance.

The sweet affectionate nature of the Pomapoo may not be a good ingredient for guard dog duties.

He is inclined to befriend and welcome anyone who comes to your home; even strangers.

Luckily, since he can co-exist with other dog breeds, you may introduce him to a German Shepard that will watch both his back and yours.

12)Pomapoos are tiny and do not take up much space

He just needs a corner in your studio apartment to play with his toys.

He will also love the large backyard space in your country home to chase after his ball or rodents.

Poma Poo is designed to fit into your lifestyle so adaptability will never be a problem.

Conclusion
If you are looking for a loyal companion with a laid-back persona, consider getting a Pomapoo.

He adapts to any environment you place him and does not ask much in terms of food and exercise.

As long as you are happy, he is happy.