The Maltipoo is a cute hybrid of the Poodle and the Maltese. The Maltese and Poodle contribute to the final Maltipoo Coat Colors. 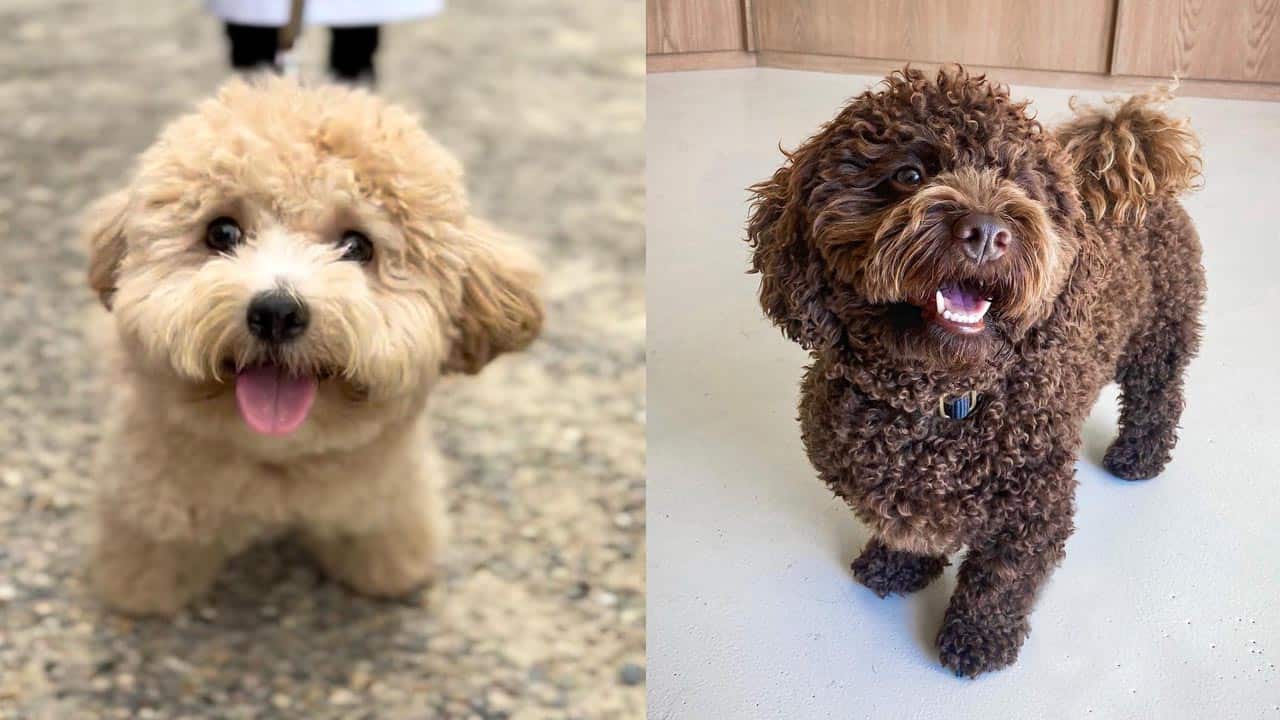 More and more Maltipoos are being bred due to the breed’s meteoric rise in popularity; as a result, more and more of these dogs are being born as second or third-generation offspring, standardizing the coat color.

Due to the influence of the Poodle, Maltipoo Coat Colors will have a variety of shades of brown, even though the Maltese itself is entirely white.

Despite this, the white will “wash out” some of the colorings in most Maltipoos’ coats, giving us a remarkable range of coat colors.

From time to time, you may even come across a Maltipoo with a striking coloration, such as black or red.

Maltipoos come in every shade that Poodles do. These can be solids, partis (multiple colors), or even phantoms, which add an intriguing dimension.

The Heritage of Maltipoo Coat Colors

Coat colors in Maltipoos, like those in any hybrid breed, can be inherited from either parent. The coat color and genetic traits of a Maltipoo are entirely determined by their parents.

Before we dive into the wide variety of Maltipoo coat colors, let’s quickly go over the Maltese and Poodle coat colors.

When you see a Maltese breed, you can always tell they are proudly displayed because of their long, white hair. There is a possibility that the fur of some puppies will have black points.

If you come across a Maltese that does not have the classic white, black, or brindle coat colors, there is a good chance that it is a hybrid with another breed of toy-sized dog. Take, for instance, a Poodle or a Bichon Frise.

However, You can find poodles in many solid colors and multicolored patterns.

According to the American Kennel Club (AKC), solid black, silver, brown, cream, blue, gray, cafe au lait, apricot, or white are the most common colors for Poodles. Other standard colors of Poodles include:

In addition, some Poodles can have colored markings for Maltipoo coats, including a black mask, black points, or a white mask.

An Overview of the Maltipoo Puppy Colors and Coats

As you can see, coat colors and patterns in Maltipoos are a mixed bag, depending on the parents’ genetic contributions. Below we shall look at the color variations of Maltipoos.

There are some stunning black Maltipoos, but they are scarce. A solid black coat on a Maltipoo is highly unusual, but those that do exist are usually a combination of black base color and lighter markings.

Since recessiveness makes it tough to breed, finding a black Maltipoo is not easy. Still, it’s not impossible.

Black and several other dark colors typically fade fast, too. Because of this, many initially black Maltipoos change to silvery gray as they age.

Because black Maltipoos are in such high demand, the price of these Doods with dark hair will reflect the increased demand.

A pure white poodle or Maltipoo, like its Maltese ancestor, has a distinctive white coat, which may be adorned with tan or cream markings. Since white Maltese are common, breeding a white Maltipoo is simple. Poodle coats that are white are considered to be desirable, similar to the tan-colored Maltipoo. White and tan Maltipoo colors are a good compromise and are commonly produced by Maltipoo breeders.

However, white coats are particularly susceptible to smudging from dirt and other elements. Consequently, some white Maltipoos frequently acquire a slight hint of yellow coloring. But using shampoo of superior quality and maintaining a regular hygiene routine will make a difference.

The cream is among the popular Maltipoo colors, and it’s easy to achieve thanks to Maltese’s light coat.

Cream Maltipoos are almost identical to white Maltipoos in appearance. When put side by side, you can see that their coat is noticeably more of an off-white color.

It’s worth noting that cream Maltipoos sometimes turn white as they get older. In addition, cream Maltipoos are easily discolored, so regular grooming—including removing debris from the dog’s eyes and shampooing his coat—is essential.

A Maltipoo with apricot fur looks just like a stuffed animal. The color of the apricot, or golden, can be produced in several ways; for example, by breeding a white Maltese with either a red Poodle or an apricot Poodle. Tones of apricot on older Maltipoos often become cream or lighter apricot.

The red Maltipoo shares a color palette with the apricot Maltipoo. On the other hand, the red Maltipoo has a coat with a deeper, more regal hue. The Maltipoo’s red coat is usually the result of a red Poodle parent.

Both red and apricot Maltipoos have the potential to lose their red coloring as they get older. Deeper reds, in most cases, give way to yellows and golds as the color progression continues.

True brown Maltipoos, also known as chocolate Maltipoos, are incredibly uncommon. Brown coat Maltipoos, unlike their black counterparts, have a brown nose. Brown Maltipoo dogs are common, but they often have other coat colors or patterns, like parti or tri.

The brown coloring is more common in F1b and later generations, just like the black color is more challenging to achieve in Maltipoos. Similar to how they darken into silver beige or cafe au lait as they age, they are also susceptible to fading.

A Maltipoo with at least half its body white is called a “parti,” or “half,” Maltipoo. The typical Parti Maltipoo coat is white with spots of brown, black, tan, cream, or apricot. Most frequently, the markings appear on the head and back.

The Maltese can be found in white and lemon patterns or white and tan, and the Poodle comes in a wide variety of color combinations, so it’s not hard to breed a parti Maltipoo.

The Maltipoo typically appears in a black-and-white pattern called a parti. Maltipoos are a mix of black and white and result from breeding either a parti Maltese with a Black Poodle or a parti Poodle with a black Maltese. Darker-colored poodle mixes can display this type of mix in their adult coat.

Frequently, a silver puppy will be born with a darker coat and gradually lighten up as he ages, becoming a beautiful silver color.

When compared side by side, a gray and a silver Maltipoo are easily distinguished from one another thanks to the former’s brighter coloring and glossier coat.

The facial and paw areas of the coat will gradually lighten. Complete transition to this vibrant color typically occurs between 2 and 3. The Maltipoo’s skin, eyes, nose, and paw pads are all completely black.

Tri-color Maltipoo is a rare breed that commands a high price on the pet market.

In the case of a tri-color Maltipoo, the three different coat colors will be distributed uniformly throughout its body.

These can be any dark or light shade, including black, brown, tan, apricot, cream, or white. Typically, the darker tones can be seen around the eyes, on the ears, and at the base of the tail.

The darker hues, once again, fade away. Brown, for instance, may mute into warmer tones of gold or cream as black does into gray or silver.

Although Sable Maltipoos are exceedingly rare, they are not impossible to find. The Sable coat pattern in Maltipoos typically consists of a solid base color with darker-tipped hairs.

In most cases, a Sable Maltipoo puppy will resemble a dark-haired Maltipoo puppy. If you brush their hair back, however, you’ll see that their fur is paler.

Phantom Maltipoo coat colors can have Phantom Markings when a bi-colored dog (also known as a parti) has two or more colors that blend in a particular way and specific areas of the body.

The feet of black dogs with this hybrid can have phantom markings in various colors, including brown, apricot, bronze, cream, gray, red, and silver. Apparent scars will take on a brownish-red hue with hints of red.

What is the Rarest Maltipoo color?

Sable Maltipoos are the rarest of all Maltipoo colors. Although Poodles of sable coloration are not widely recognized, they do exist.

Sable is a stunning coat color, even though it is not correctly classified as a color. The term “sable” describes hairs with a dark tip. The coat’s colors are usually somewhere between brown and grey. The darker peak will be an extremely dark shade, possibly even black (chocolate sable). In many cases, the hair’s roots are a white, cream, or light tan color.

The Maltipoo takes its coloration cues from the Poodle, as Maltese dogs only come in white and occasionally cream.

The darkening of the sable Maltipoo’s coat’s tip may disappear as it ages, though this does not always happen because the coat’s tipping is removed during the trimming process. Some Maltipoo’s new hair growth will have dark tips, while the inner hair color will remain the same in others.

As with other Maltipoo coat colors, a sable Maltipoo puppy may look very different from an adult.

What is the most common color of Maltipoos?

Because they are a hybrid breed, Maltipoos can come in many beautiful colors. The Maltipoo with a white coat is the most common color in this crossbreeding combination.

Because of the dominance of the white gene, Maltese dogs tend to be white or occasionally have a beige or cream tint to their coats. Also, white is a typical coat color for Poodles as well. It makes sense that white should be the most common color among Maltipoo puppies.

Although color change is not standard in Maltipoo puppies, it is still worth considering. The progressive graying gene is passed down from the Poodle ancestry to many Doodles, including the Maltipoo. Puppies who carry the clearing gene, also called the fading gene, gradually lighten in color as they age and approach adulthood.

You cannot prevent the fading of your Maltipoo puppy due to a genetic predisposition. If you’re worried that your new puppy might have a fading gene, you can always ask the breeder about genetic testing.

In contrast, white and cream Maltipoos are more vulnerable to discoloration from things like dirt and eye boogers.

Maltese and Poodles breeding creates a miniature and an adoring dog called a Maltipoo. The single most bugging consideration when selecting a Maltipoo is its coat color. Picking a puppy, however, should not be done based on its coat color alone.

Even though it’s excellent to prefer a particular shade, you should know that specific Maltipoo coat colors are more common and rare than others.