Due to their easygoing nature and nearly hypoallergenic coat, Groodles are one of the most sought-after designer dogs. Due to their Poodle heritage, they also come in various colors. 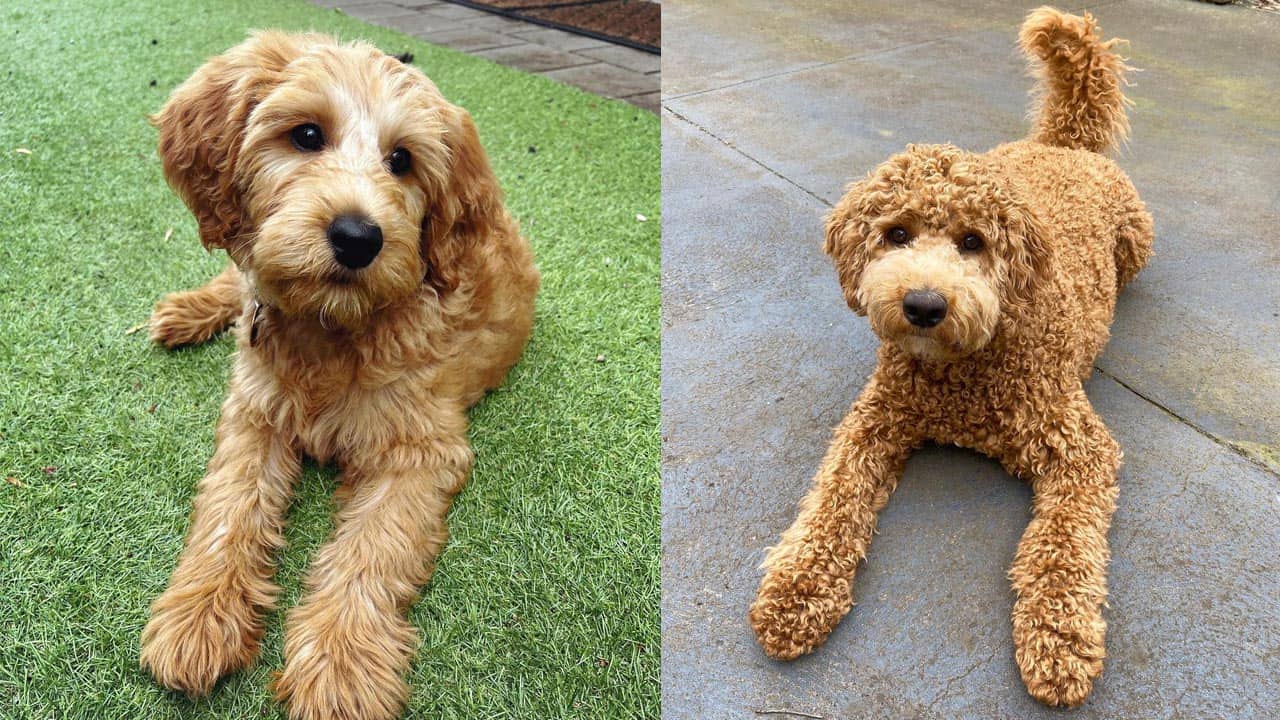 Different patterns, including sable, abstract, parti, tuxedo, phantom, merle, and brindle, are also common in Groodles. If you have your eye on this breed, all of these are equally beautiful and deserving of consideration.

In this post, we’ll explore the different coat colors of Groodles.

Groodles have three different coat types. These are curly, flat, wavy, or otherwise unsuitable. The most prevalent coat type among Groodle generations is the wavy or shaggy one. It must be brushed once or twice a week to preserve this.

The second variety is the curly coat, which the Groodle inherited from its Poodle ancestors. F1b and a few multi-generational Doodles exhibit this.

The last flat variation is also seen as inappropriate for this cross. This appears to deviate from the intended teddy bear appearance that most breeders pursue because it resembles the Golden Retriever coat quite a bit.

The above Groodle is dressed in an apricot coat, mistaken for cream or tan puppies because of this red color variance, which frequently lightens with age.

Because they resemble teddy bears, apricot is arguably the most desired of all the colors featured here. They inherited this quality from their Poodle father, who has a similar tone.

Apricot is the last officially recognized Poodle color. This indicates that the several variations of the crossbreed now include apricot Groodles.

Although uncommon, Champagne Groodles exist; they have a recessive red gene but are diluted, giving them a yellow-to-cream tone.

They aren’t creating many waves in the dog world, but if you want a dog that looks like a teddy bear, you should still consider them.

Groodles in those colors are quite popular. You most likely pass across one in your area on your morning walk. Their strong Poodle bloodlines gave them their rich brown color, although some start to silver as they age.

If you’ve never heard the term “silvering,” it means what you think it does. When the coat clears or lightens, this condition can occur in black and chocolate dogs. Depending on their DNA, chocolate or brown dogs may turn silver beige.

But hold on! You’ll be let down if you assume that breeding two chocolate Groodles will result in an all-brown litter. Because this hue is predominantly recessive, it is common for different colors to appear when bred.

Another color combination besides apricot and red is a cream Groodle. They are so pale in a color that people frequently mistake them for white Labradoodles or Groodles.

Since creams have the widest range in coat tones and points, it is conceivable to see one with light features and another with darker eyes, noses, and toenails. Some have a rosy underside to them.

If the beauty of the black Groodle pictured above doesn’t convince you, you might benefit from a set of glasses. With their velvety coats, jet-black Groodles are just stunning to behold.

Because of the “silvering” procedure, most black pups eventually turn silver or blue, but their paw pads, nose, and eyes are often all-black.

Groodles that were silver beige experienced silvering before developing their coat. They are born chocolate, but they clear their hue and turn silver beige due to a few specific genes.

Although they don’t have black-tipped hairs, they resemble sables almost exactly. The combination of silver to gray hairs and the beige coloring gives the impression that they are sables.

Groodles in black and white has two colors on their coat. There are situations where the white color predominates, but there are other situations where black people constitute the majority.

Contrary to popular belief, “Tuxedo” refers to a particular coat pattern, not all black and white Groodles. Later, when we talk about other color patterns, I’ll discuss this further.

Blue Groodles may appear gray at first glance, but they are not. These dogs are extremely uncommon and can only be produced by breeding Groodles over several generations.

Similar to the gray ones, some may develop a clear coat, but some will remain blue.

A black color predominates at birth in gray Groodles, and around six weeks, some discernible gray coloration appears.

When they are two years old, they lose all traces of their former nearly-black tint and even soften their gray coloring to a rustic silver.

Red Groodles have a rich mahogany appearance and are regarded as the brightest species because of their distinctive coat.

Red Groodles share a strong Poodle gene with apricot Groodles, which is how they acquired their magnificent coat color. When they get older, this can become a lighter shade.

Silver Groodles are essentially paler shades of gray and blue despite having a dark color at birth. You can quickly tell them apart from other people because of their hair, which resembles that of an old man.

Most silver Groodles start to exhibit silver characteristics between 6 and 10 weeks of age, but there are differences in their coat tones.

Pheomelanin, a typically red pigment, was diluted in tan Groodles to give them their coat color. Compared to reds and apricots, they are less prevalent, yet some breeders choose to cultivate them because of their subdued tone.

Most white Groodles don’t have completely white coats. Since they are of this variety, it is normal for some of their body to appear cream-colored.

Given that Golden Retrievers don’t typically have white coats, it is thought that this color is mostly inherited from their Poodle parents. So when you encounter a white Poodle in person, you’ll notice its coat also has a slight cream hue.

As was already said, Abstract Groodles have a base color accompanied by hints of white, typically located on their face, breast, and paws. Typically, one color predominates in them.

Dark skin patterns resembling tiger stripes are present on the skin of brindle Groodles. Most of them, as seen in the image, have light-base hairs, highlighting their stripes.

Merle Groodles come in both traditional and watercolor styles. Like the Doodle above, traditional merle puppies typically have some blue or chocolate ticks or patchwork on their bodies.

Tickings are also seen on the coats of watercolor merles, which are more difficult to find. They differ from the first because as they become older, their coat gets lighter.

Parti Groodles have two coat colors that are dispersed equally. They have a coat that is 50% white and 50% any breed-acceptable color.

The majority of Groodles with this coat pattern result from several generations of breeding. Due to this, no two parti puppies have the same appearance.

There aren’t many Phantom Groodles around. Their coat typically has two colors: the basic hue and a lighter tint. The lighter tips are located on their eyes, muzzles, and legs.

Dark-tipped hairs of Sable Groodles gradually get lighter as they get closer to the skin. Most of the time, inexperienced pet owners mistake this for specific coat disorders, which is usual for this hybrid. One of the 13 colors mentioned before could serve as the base coat.

Due to the white markings on their bodies being concentrated on their chest and legs, Tuxedo Groodles get their moniker and appear to be wearing a tuxedo.

As we’ve already established, apricot is the last recognized color that Poodles are known for. The popularity of the Golden Retriever/Poodle mix has also been impacted by its status as the breed’s newest color.

Apricot is the most preferred color for Groodles, followed by cream and red. Even though they are not as popular as the three colors indicated above, sables are in demand.

Given how popular these hues are, you may anticipate that they will cost a little more than their more affordable relatives.

What is the most common groodle color?

Although apricots, reds, and cream Groodles are rather common, they are less prevalent than black Groodles. Unfortunately, these black puppies are not very sought-after despite being common.

Because they don’t resemble teddy bears, the key selling feature of this crossbreed, they may simply be the least favored among Groodle enthusiasts.

What is the rarest Groodle color?

The most uncommon Groodle hues need several generations of breeding to produce. This indicates that you must breed puppies older than the second generation, or F2, to create these dogs. Which are:

Two patterns are discovered to be uncommon in addition to these colors. The two breeds are the parti and the phantom Groodle. They are only possible through multi-generational breeding, just like the gray, blue, and silver dogs.

As with other crosses and purebreds, Groodles gradually change color as they age, and their Poodle heritage is the cause of this anomaly.

When puppies reach about two years old, red and its variants typically become lighter, but other hues may also lighten through a process known as “silvering,” which is more common in black and chocolate puppies who, depending on their genes, may out blue, silver, or silver beige.