The Cocker Spaniel and Poodle hybrid is known as a Cockapoo. Poodles and Cocker Spaniels come in various coat colors, so Cockapoos come in multiple sizes and shapes due to their mixed-breed heritage. 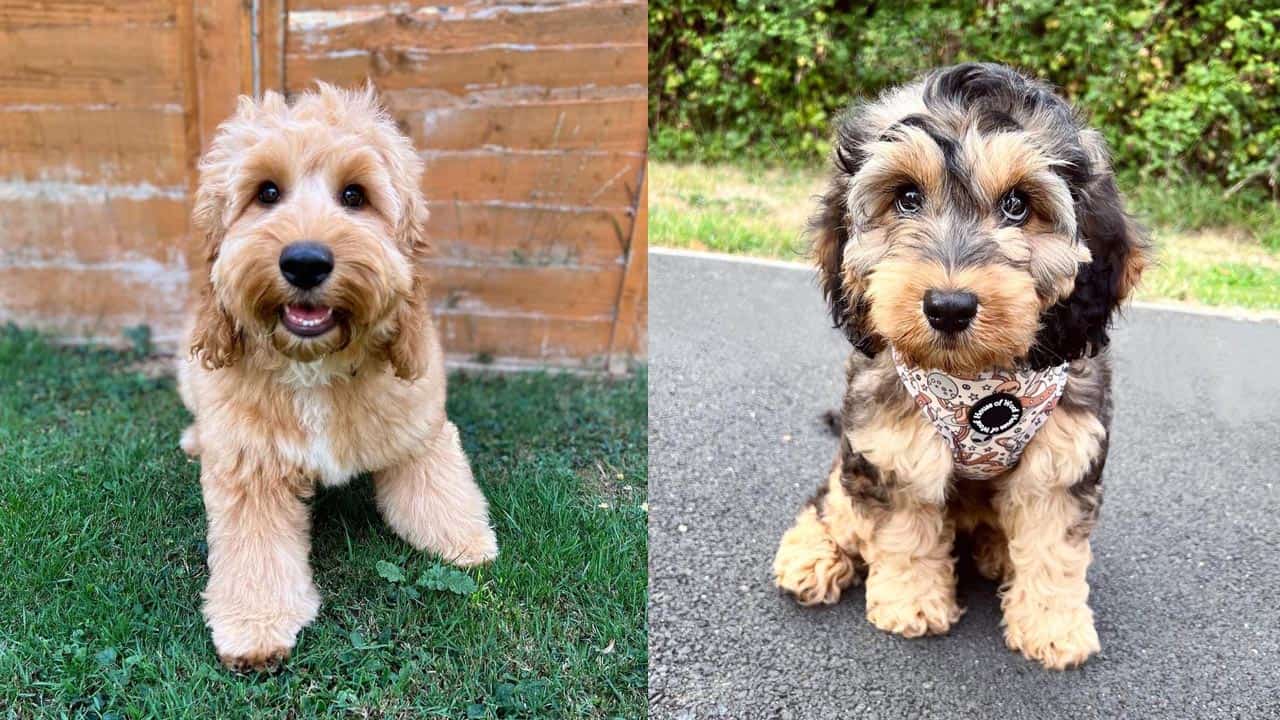 The coat on these dogs is typically curly or wavy, but it can be smooth if they inherit more traits from the Cocker Spaniel.

Choosing a Cockapoo can be challenging because they come in various coat colors and patterns.

This article will discuss each of the Cockapoo Colors in detail to help you find the ideal dog for your family.

What Type Of Coat Does A Cockapoo Have?

The single, long coat of the Cockapoo can be either loosely curled or straight. Even though Cockapoos don’t have a lot of hair to lose, they still need to be brushed at least twice a week. Long hair can also grow over the eyes, so you’ll need to cut it away so your pet can see clearly.

Cockapoos have been around for quite some time. Combining the characteristics of the Poodle and the Cocker Spaniel resulted in this new dog breed. As such, the coat colors can be interesting.

As friendly dogs, they are simple to housebreak, adaptable to urban dwellings, and abound in love and devotion. They get along well with other dogs and children. Traditional Cockapoo coat colors include tan, beige, blue merle, silvery beige tone, golden, and creamy.

A black Cockapoo coat stands in stark contrast to the more common Cockapoo coat colors, making it stand out even more. Although Cockapoo colors can often be a true midnight black, it is often passed on along with the gene that causes colors to fade.

Consequently, many previously black Cockapoos have aged to a grayish hue. As a result of the color’s underlying coolness, it can appear bluish.

When the Cockapoo colors fade, it usually happens within the first two years and slows down. The black or gray fur’s shine or matte appearance depends on the hair’s texture. So, a black Cockapoo’s fading fur, whether matte or shiny, could look like gray or silver.

Additionally, while some Cockapoos are born wholly black or gray, the majority of the breed is a combination of those two colors. Often, these Cockapoos have white markings on their chest, belly, face, and paws.

Black Cockapoos typically have black noses, and their typical eye color is brown.

Extreme fading can cause Cockapoo’s colors to shift to tan or beige. In some cases, a chocolate Cockapoo will be born looking nearly black.

A brown Cockapoo may be entirely chocolate in color, but it is more typical to see white on the dog’s chest, face, and paws.

Brown Nose color in cockapoos is variable. There’s a broad spectrum of possible tones for eyes. It’s possible to see a brilliantly contrasting color, like blue or green, every once in a while.

For a Cockapoo, this is an exceptionally beautiful and unique coat color. Though similar to the apricot Cockapoo in appearance, the red Cockapoo’s coat is darker and more coppery. Some red Cockapoos’ coats lighten to apricot as they age, but others keep their original deep red hue throughout their lives.

It’s not uncommon for these dogs to have a shade that’s almost chocolate but still has a rosy undertone that earns the designation “red.”

Sometimes they have a duller red color, and other times they have a much brighter red, like a copper penny. Some are more apricot in tone, but their shade is darker than what we usually think of as apricot.

The dog’s entire body will be the same color, with no or slight shading. However, lighter areas on the dog’s face, chest, and tummy are not uncommon. Occasionally, the spots can appear almost white.

The term “buff” is not limited to a single coat color when referring to Cockapoos. It encompasses a wide range of coat colors, such as:

You’ll find a breakdown of the various beige tones down below. Remember that there is some overlap and that different people may mean slightly different shades when they use these terms.

Dogs with very light brown coats are often referred to as “tan” or “beige.” Similar to dogs of other colors, these dogs’ coats are darker around the ears and lighter elsewhere, such as on the chest and belly.

Sometimes, a Cockapoo born with a tan or beige coat looks more like a medium “true” brown. However, it will have taken on a pale tan or beige color in just a few months.

There are Cockapoos whose coats are so light and creamy that they are almost white. There may be patches of whiter and creamier fur. The ears and the areas near the noses can be brown or black with creamier patches.

Cream-colored Cockapoos may occasionally exhibit undertones of other colors, such as apricot or golden. Some Cockapoos born with tan or beige fur may naturally lighten to a creamier shade as they age.

As with the color golden, this coat variety is unusual and stands out. It is commonly described as a very pale golden.

It’s possible to occasionally see a “neutral,” less yellowish shade, one that’s more akin to a pale taupe than a pale gold. Ears tend to be darker, while the neck’s stomach, chest, and back are lighter.

The eyes and nose are noticeably darker compared to the rest of the fur. Theoretically, a Cockapoo born with a golden coat could gradually turn champagne over time.

A golden Cockapoo has a very light brown coat, almost tan. The coat is primarily black, but a noticeable yellowish undertone makes it appear more “golden.” Golden toy poodles and English cocker spaniels are the most common breeders of these dogs.

Due to the relatively narrow breeding requirements and limited possible outcomes, Cockapoos with this coat color are a rarity.

The rich, crimson color of these Cockapoos’ coats inspired the breed’s name. They could be:

As might be expected, many apricot Cockapoos have a darker coppery coat at birth that fades to a paler shade as they age. The red undertone should stay even if the color becomes lighter.

These dogs often have lighter areas on their bellies and chests, on the backs of their necks, and on the corners of their mouths. In either case, their noses can be either black or brown.

One of the most eye-catching characteristics of a Cockapoo is its merle coat pattern. This coat features a marble-like swirl of contrasting colors. Many different Cockapoo colors are available, including but not limited to grey, brown, white, black, tan, and red. Two or even three colors can coexist on a single merle Cockapoo.

Merle Cockapoos are easily recognizable down to their unique snouts and eyes. Noses can get freckles occasionally. Each eye can be a different color, and both brown and blue eye colors can coexist.

However, the gene that causes a merle coat to form also increases the risk of certain diseases. Thus, it is never recommended to breed two merle Cockapoos. The offspring could develop visual or auditory impairments.

A merle Cockapoo that is blind, deaf, or both can still be trained and cared for to have a happy and healthy life.

The coats of Phantom Cockapoos have a very particular pattern of colors. Coloration-wise, the most common tricolor pattern consists of tan, black, and white. It’s possible to find shades of brown, red, silver, and even more colors.

Most Phantom Cockapoo’s bodies will have a darker color, such as black or brown. The muzzle, the forehead, the chest, the legs and paws, the underside of the tail, and the ears will all be a lighter (i.e., tan) color.

The patterns are very even and symmetrical. It’s not hard to spot a phantom once you know what to look for, even though their appearance can vary slightly.

The coat of a cockapoo is always a deep shade, be it black, brown, or red. A white stripe, however, runs down the middle of this dog’s chest. Sometimes there will be a touch of white on the face (typically around the muzzle) or the toes. On other occasions, however, the dog’s fur will be a uniform shade, with just a white stripe across its chest.

Some Cockapoos, though not all, have a roan coat, which consists of a “salt and pepper” pattern of white and darker hairs.

The darker hairs can be any number of colors, and they can vary significantly from dog to dog. Colors like black, brown, bluish-gray, red, golden, and so on commonly occur.

However, these dogs often have roans on their chests, stomachs, and darker ears and cheeks. Their legs, backs, and faces can all have a roan pattern.

The coat of a sable Cockapoo is multicolored, typically including shades of black, red, and tan. Typically, the chest/stomach area and the area around the muzzle are the palest parts of the coat, while the ears, cheeks, and back are the darkest. However, some outliers deviate significantly from the mean.

The sable coat stands out in particular because the different colors blend so beautifully into one another. The result is a beautiful color transition.

We usually refer to a Cockapoo as having a “parti-color” coat when it has two colors present in roughly equal amounts. White is the most common of these colors, but the Cockapoos coat could also appear in cream, light apricot, or a neutral shade.

A Cockapoo with black and white markings might be a particolored Cockapoo. The same is true for Cockapoos of any other two-tone color scheme, whether red and white, brown, dark brown and white, buff and white, etc.

Although there is some variation, these dogs usually have dark cheeks and ears and light bellies and chests. Their backs and sides may feature alternating dark and white patches.

“tri-colored” Cockapoo coats are a subtype of the phantom coat. Some phantom Cockapoos have three colors rather than the usual two. When this occurs, we might say that they are “tri-colored.”

Cockapoos of the merle variety are especially hard to come by due to the inherent health risks associated with the merle gene.

What is the rarest Cockapoo color?

Due to the potential health issues associated with the merle gene, merle Cockapoos are the rarest of all Cockapoo coat colors.

What is the most typical color for a Cockapoo or Cocker Spaniel?

Black, cream (or white), apricot, red, and chocolate. Cockapoos are the most common solid colors for this breed of dog.

Cockapoos come in a wide range of colors which can vary widely, with over eleven distinct types.

Although cockapoos can have a solid color, even those coats often have white markings, most notably on the chest.

A Cockapoo of any color will be an excellent addition to your family, as coat color has no bearing on either temperament or health. You will adore a Cockapoo regardless of whether its coat color is black, golden, or merle.