Bernedoodle colors typically feature the same tricolor pattern as that of a Bernese Mountain Dog, which has become the breed’s most recognizable characteristic. 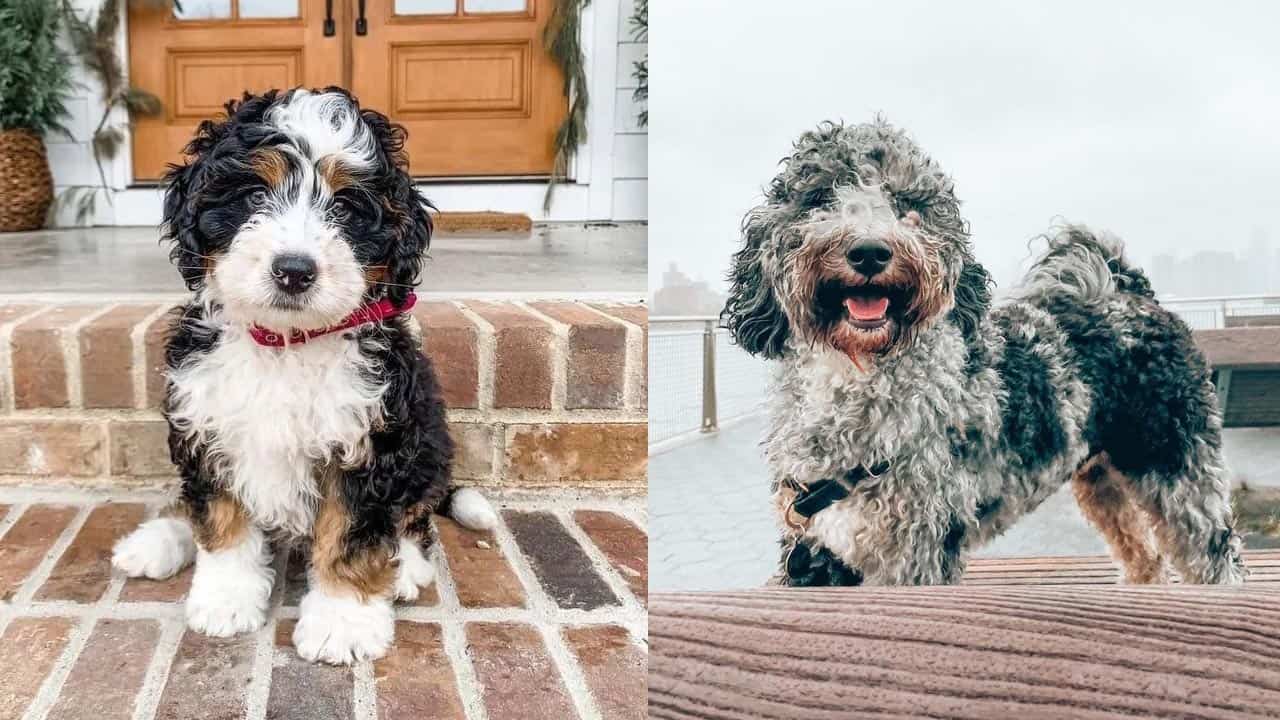 Due to their shared genetic heritage with the Poodle, Bernedoodles can be found in a rainbow of colors and patterns.

The fluffy, soft coat of a Bernedoodle, generally hypoallergenic and non-shedding, makes this dog a popular choice for allergy sufferers and those who simply want a low-maintenance pet.

Some puppies may not have all of the typical Bernedoodle colors. Based on the genetic patterns of both sets of parents, we can predict the range of possible coat colors for an upcoming litter.

This post will cover the most common Bernedoodle coat colors and some unique coat patterns.

Bernedoodles come in various coat colors and patterns, so it’s essential to understand their breeding history.

They are the offspring of a Poodle and a Bernese Mountain Dog, and their coat colors are a harmonious blend of those of their parent breeds.

These fluffy dogs are available in a wide variety of coat colors that are as rare as this hybrid breed itself because they inherit the non-shedding coat of their Poodle parents and a combination of the coloring of the Bernese Mountain pet.

There are countless possibilities when we breed two purebred dogs together. Naturally, a Bernedoodle puppy will take after its parents and grandparents.

The tan and rust coloring typically appears above the eyes, cheeks, sides of the chest, legs, and the base of the tail. The white spots can be seen anywhere from the nose and between the eyes to the chest, the neck, and the paws.

On the other hand, Poodles are available in many different solid colors, including blue, gray, black, silver, apricot, cream, brown, red, cafe au lait, silver beige, and white. Poodles are not limited to the more common solid colors; they can also be found in various patterns and colors.

What Are The Most Typical Coat Types For Bernedoodles?

A significant aspect of the hybrid is the lack of predictability in their physical characteristics. Puppies from the same litter can have wildly varying coat colors and patterns.

You should be aware of the various coat varieties as they may play a role in determining the prices involved.

People who are allergic to dander and hair should avoid this coat because of its higher propensity to shed. As a side note, the straight coat, also known as the flat coat, is not entirely straight; instead, it has slight waves.

The majority of Bernedoodles have this coat style. The coat has a distinct wave pattern and sheds very little.

Since it is hypoallergenic, this Bernedoodle coat is the most popular. Because of the tight coils, hair stays in the curly coat even though it may shed just as often. Therefore, they need to be groomed regularly.

A Guide on Bernedoodle Coat Colors

The merle pattern is rare in Bernedoodles but is also one of the most beautiful coat colors. A Merle Bernedoodle’s coat will typically have a solid base color with lighter patches of color throughout.

Although merle coats are less common in Poodles than in Bernese Mountain Dogs, you can pass on a merle coat gene carried by one parent to the offspring of a Bernedoodle.

Another unusual Bernedoodle coat color is a red and white variety. The traditional Bernedoodle is a reddish brown all over, with white hair on the chest, face, paws, and legs.

There are also red and white parti Bernedoodles, which are entirely white on the inside furs. The red markings, in contrast, are typically located on the head and neck, though they can also appear on the shoulders and back.

Tri-color is one of the more common Bernedoodle coat colors. Bernedoodle was initially bred to honor the Bernese Mountain Dog.

The Bernedoodle coat has three distinct colors in a tri-color pattern. Black, tan, rust, brown, white, apricot, red, and cream are just some colors that can create a wide variety of tri-color patterns. The body is darker than the chest, face, feet, and paws, which are white.

The Bernedoodle in sable is another popular coat color option. A sable Bernedoodle’s solid coat has black tips, giving the dog a unique appearance.

The degree to which the ends of the hair are black determines the overall coat color. Additionally, Sable Bernedoodles have the best chance of clearing, so their color gradually becomes much lighter as they age. It is usual for their ears to retain their dark color, but the hairs at the tips of their ears to “grow out.”

Black and tan is the most frequent color scheme for the Phantom Bernedoodle. An overall black coat characterizes these puppies with tan markings on the head, chest, legs, and paws. Again, this is one of the rarer Bernedoodle colors, but it’s stunning nonetheless.

A Phantom Tricolor Bernedoodle looks like a black and tan Phantom Bernedoodle but also has a white chest.

All of their bodies are black but have tan markings on their legs, faces, eyebrows, paws, and chests.

At least half of a Parti Bernedoodle’s coat is white, and the rest is a secondary color often marbled throughout the white. They are frequently mistaken for Phantom Bernedoodles, which are also popular but have a two-toned coat but no marbling. Bernedoodles can be considered “parti” if they have splotchy or haphazard markings of their secondary color.

Because the Bernese Mountain Dog lacks the chocolate gene, chocolate coats are typically seen in offspring of the F1b generation and later.

Some dog breeds have coats that are colored, Brindle. The brindle pattern is less pronounced than a tiger’s coat, but it is sometimes called “tiger-striped.” You can find brindles in both blue and red variations.

When they get older, the brindle color pops. There are several different types of brindles, including solid Brindle, Brindle with white like the Bernese Mountain Dog, and the more abstract Brindle.

Bernedoodle puppies undergo a “cleaning” or “holding” phase during layering. During the holding phase, your puppy’s coat won’t change color at all, and during the clearing phase, it will lighten or fade.

During the cleaning process, the layer may also become relatively lighter in some cases.

Once your Bernedoodle’s adult coat begins to take shape, these phases can begin. Around the same time, you’ll see that some coat regions retain color better than others.

The ears and muzzle are the usual dark spots on a coat.

If you want a Bernedoodle but don’t want its layer color to change, you should choose a puppy with a darker layer color than the one you’re hoping for.

When your dog reaches adulthood and begins to shed its puppy coat, the lighter shade will mature into the desired color.

What Is The Rarest Color Of Bernedoodle?

It’s possible that if you want to adopt a tri-color Bernedoodle, one of the most sought-after variations, you’ll have to wait longer than if you tried to adopt a standard Bernedoodle.

What Is A Bernedoodle’s Most Common Color?

Poodles come in a wide range of colors, and this diversity is mainly due to genetics. The most common Bernedoodle colors are black and white Bernedoodles and tri-color Bernedoodles

What Color Do Bernedoodle Pups Take When They Mature?

Poodles’ recessive fading gene is commonly found in Bernedoodles. This is why it is normal for Bernedoodles to go through a color change as they get older.

Bernedoodles, like many other Doodles, frequently inherit the fading gene from the Poodle side of their family tree. You can tell if a Bernedoodle puppy has the fading gene by the time they reach adulthood. Most of the time, this happens between 6 and 10 months.

This lightning, also known as clearing, is most noticeable in Bernedoodles with dark coats, such as blacks and browns.

Fading-gene carriers of the black Bernedoodle breed often cause their coats to lighten and take on a silvery gray or even blue hue. Over time, a Bernedoodle’s coat color can change from chocolate or brown to silver, cream, or silver beige.

Inquire about the litter history and whether or not the breeder expects any of the pups to inherit the fading gene if you’re hoping to find a specific shade.

You can determine the likely color of your puppy’s coat through a DNA test, which you and the dog breeder can perform at an additional cost.

Does a Bernedoodle’s Coat Color Impact their Health or Behavior?

If you’re looking for a healthy, well-behaved dog, don’t worry about the color of your Bernedoodle; black and white and tri-color varieties are just as good. Bernadoodle coat color has no bearing on temperament or health.

However, merle Bernedoodles may have an increased danger of developing some health issues, such as deafness or blindness.

This is why two merle Bernedoodles should never be bred together.

It can be challenging to decide what color coat you want for your Bernedoodle puppy. All Bernedoodles have outstanding personalities in addition to their natural coat colors, which can vary from dog to dog.

You ought to know by now that selecting a color you like for your puppy is not as simple. Although a breeder may know the spectrum of colors to expect in a litter, they cannot promise a particular mix of colors.